Now it has happened. I finally assembled the 3D printer kit Prusa i3 MK3, which I bought in 2018. 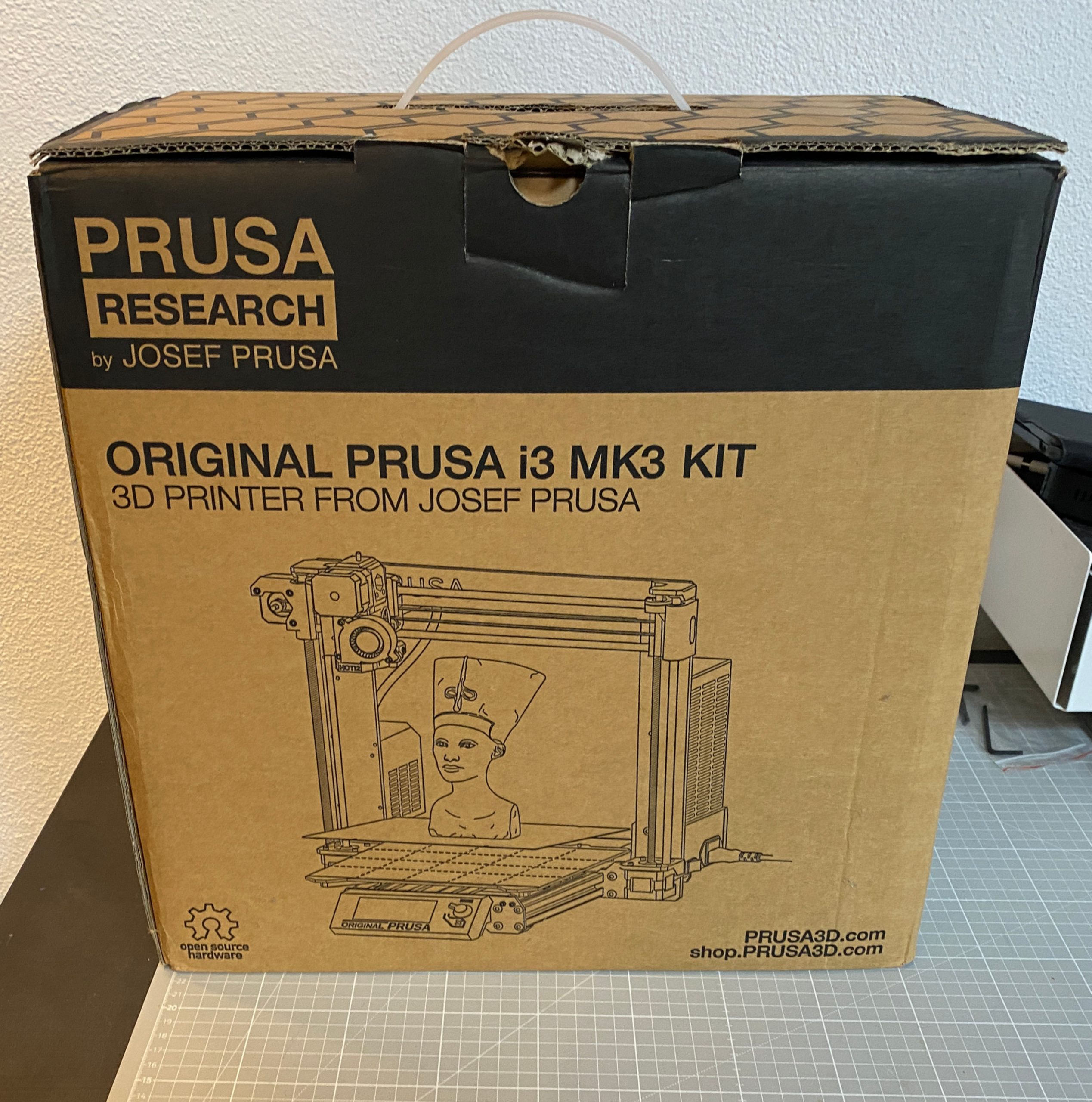 Why did it take so long? Well, I was really eager to dive into 3D printing, but when the Prusa i3 MK3 kit arrived in a big box, I shied away. The instructions said that it could be assembled in four to eight hours, but I regarded that as an optimistic estimation, in particular not taking into account all the debugging and tinkering afterward. And there were no two to three consecutive free days I could have used for it. So, it had to wait for some time.

Well, in the end it was not as bad as I had expected it. The kit consists of roughly 130 screws, 50 nuts, and 120 other assorted pieces. And I put all of it together in less than 16 hours. This included, of course, scratching my head and reading comments other people had left in the online instructions. Further, I had my IKEA moments, when after being almost done with a chapter, I noted that one piece was oriented in the wrong way and I had to disassemble the part I just built. I have to admit, though, that the instructions (which came as a printed booklet and as online instructions with comments from others) are extremely detailed and most of the time very easy to follow.

What came as a final surprise was that the printer worked almost immediately after I had finished the assembly process. Well, the only thing I needed to adjust was the height on which the first layer is printed. And then all of the example models worked right out of the box.

However, printing something usually takes quite some time. You have to wait for almost two hours before the little boat is ready. The planetary gear takes even 10 hours.

The next thing, I wanted to print was Freiburg. Actually, only a small 19×19 cm model of the city center. The 3D data can be found on the website Cults3d.com and the estimated printing time is 20 hours. Downloading the model and generating the G-codes was a piece of cake, but then the print failed twice.

First, I got a filament tangle on the spool, and the printer stopped in the middle of the print. The reason was that I did not keep the filament tightly wound on the spool. In a blog post, Alec from MatterHackers explains how such tangles happen and how you can avoid them. During my second print trial, the filament got clogged in the extruder. Something that apparently happens when one uses filament that contains too much water. So, I learned to disassemble and clean the extruder, which is fortunately very well explained on the Prusa website. The third time, printing succeeded.

And one can even make out Freiburg Münster, as shown in the next photo. Of course, the resolution of the printer is limited, as one can see.

So, what comes next? For one thing, I will try to learn how to do 3D design. As a starting point, I will have a look into two books by Lydia Sloan Cline: 3D Printer Projects for Makerspaces and Fusion 360 for Makers. Then, I ordered an enclosure for the printer containing an air filtration system, since the printer fumes, which are supposedly non-toxic, are nevertheless very annoying. And finally, I bought a 3D scanner kit, for which I have to print the mechanical parts first. So, a lot to explore!

Finally, there might be the question of whether my printer is not hopelessly outdated after sitting four years in the box. It turns out that Prusa offers a new model by now. However, I can buy the upgrade to the current model for €50. Well, may be, I will do that in the future. However, the printer seems to work OK as it is, and the differences are not revolutionary. Even Prusa writes that “if your MK3/S runs without any issues, you will not gain any significant printing quality improvements.”

So, all in all, I am quite satisfied with the printer kit and can only support what PCMag.com have written about the current version of Prusa printer: “[…] the i3 MK3S+ is the culmination of nearly a decade of refinements to the company’s flagship 3D printer. It’s easy to set up and use, and in our testing consistently produced prints of above-average quality with zero significant problems.” If you are looking for a 3D printer or printer kit and do not have any previous 3D-printing experience, you should definitely consider Prusa printers!